On some teachings from Chapter Seven of the Bhagavad Gita

The Bhagavad Gita is one of the scriptures of the world which reassure us that there is a transcendental reality that is beyond the range of our mind but which is also the ground of our being and the ultimate source of help and fulfilment. The Gita presentation is not dogmatic; so far as possible things are explained in a rational way. This article is about some teachings from the Gita which exemplify these qualities. In chapter seven we read:

Understand that matter and energy and the laws of nature come from Me. But I am not in them, they are in Me. [7:12]

In this verse, the Supreme Being apparently is speaking to us, in the first person, as ‘Me’. Before going any further, let us ask ourselves if we find this implausible and harbour a reservation that undermines our interest and confidence in all that follows.

Two things are implied here. One is the existence of Ultimate Truth, whatever that may be. As the Reality beyond the limits of our minds, it is sometimes called the Transcendental; and as the reality in things, rather than their appearance, it is called the Noumenal. These are different names for Reality, the existence of which cannot reasonably be doubted. In the Gita and the non dual philosophy, two words are often used for that Reality: Brahman, meaning the absolute Whole, and Atman, meaning the true nature or Self of all. Brahman and Atman indicate the same reality, approached from different perspectives by the human understanding.

Secondly, what is implied in the verse by the word ‘Me’ is that Reality may be known or discovered as the truth in one’s own being, not only in theory, but also in direct experience. This is not knowing a fact through the senses or reason; in such cases, what is known is an object different from the one who knows. This is knowledge of the nature of one’s own Self. As this knowledge is unmediated by the workings of an individual mind, it is knowledge of the Self that underlies all minds. One who knows this Reality, Brahman, now refers to that as Atman, the true Self, as Me.

There is thus nothing implausible about this verse to undermine our respect for what is being said. So let us pass on to that.

This article is from the Summer 2019 issue of Self-Knowledge Journal. 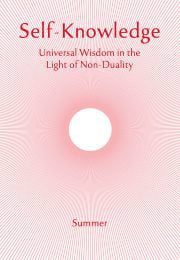