Meister Eckhart lived from 1260 to 1327 or 1328. He was a Christian spiritual teacher whose insights have much in common with those of the non-dual philosophy. People started writing down and preserving his advice probably when he was in his early 40s around 1300.

Eckhart was born near Erfurt, in central Germany. He joined the religious order of the Dominicans at around the age of 15. The Order believed in study and learning, to help them preach more effectively, and, as a student Eckhart showed great promise. He was sent to Paris, the centre of learning for western Christendom at that time, and when aged about 40, he went there a second time for advanced studies, earning his degree of Master of Theology. His writings show a wide knowledge not just of the works of Christian writers, but of Greek, Roman, Jewish and Arabic philosophers and prophets.

Meister Eckhart was also appointed as an administrator with a supervisory role over the Dominican religious houses in a large part of Germany and Holland, and similar responsibilities for Bohemia. In his early 50s, he is known to have taught in Strasbourg, where it is thought many of his sermons were taken down. So he was a man of action as well as of contemplation, and he must have spent a good deal of time on the road travelling.

Among his early writings is a short collection called Talks of Spiritual Instruction which he probably gave to younger members of his religious community at Erfurt round about 1300. Even at this stage his teachings show great insight. For example he clearly recognises the need for a quiet mind.

The most powerful prayer of all and the noblest work of all are the result of having a quiet mind. The quieter it is, the more powerful, worthy, useful, praiseworthy and perfect are the prayer and the work. A quiet mind can do all things. What is a quiet mind? A quiet mind is one which is worried by nothing and is tied to nothing, which does not cling to any mode, is free from self-seeking, for it is fully immersed in God’s dearest will, and has dropped its own self-will. One can do nothing that does not get its power and strength from this source.

A different translation uses the words a ‘bare’ mind, meaning a mind free from thoughts. And Meister Eckhart’s basic idea is that this interior emptiness, this quietude, will be filled by the divine presence in the form of infinite peace and holy understanding.

This article is from the Spring 2021 issue of Self-Knowledge Journal. 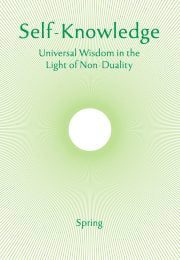