The Spiritual Awakening of Science considers key points in the historical development of science and their relation to the search for direct experience of reality through meditation and related practices.

The chapters are on:

1 The Origins of Science
2 Science under Islam and the Mediaeval Church
3 Science Comes of Age in the Renaissance
4 Science Faces a Choice
5 Knowledge and Wisdom
6 Looking to See: The Science of Experience
7 Science Triumphs with Newton
8 How the First of Newton’s Discoveries Came to be Known
9 How Newton Came to Write his Most Famous Work
10 How Newton Began to Work Out the Laws of Motion
11 Newton Describes the Laws of Motion and the System of the World
12 The Publication of Newton’s Principia and its Aftermath
13 The Vital Spark [On the nature of Consciousness]
14 An Example of Greatness [On Michael Faraday]

Here are some extracts from the first chapter:

The ‘golden age’ of science in ancient Greece began in the sixth century BC and lasted for about three hundred years. What helped to start science was the fact that the citizens of the Greek City States were, unlike the Babylonians and Egyptians who preceded them, free men in a society without a well-developed, institutionalized religious system which, in the two older civilizations, deliberately kept all knowledge secret and in the hands of the priestly caste. Both the Egyptians and the Babylonians had been interested in mathematics and astronomy, but progress was slow. The Egyptians, for instance, took their year as being exactly 365 days, twelve months of 30 days each, together with five extra sacred or heavenly days, but they found that, when the calendar was worked out in this way, important yearly events like the flooding of the Nile did not fall at the same time every year, but moved steadily back through the calendar. Early on, probably about 4,240 BC, they discovered that a better indication of the Nile flooding was the first appearance over the horizon of the star Sirius (which they called Sothius), and from then on they used this as the marker, finding, as a result, that the year actually consisted of 365 and a quarter days…

The presupposition of this whole scientific movement was thus that, if you went about it the right way, the world was understandable, and mathematics provided the most powerful way of analysing it. By careful observation and measurement of the facts, and thinking about them, you could work out the explanation. In this way the Greeks began the study of ‘natural philosophy’, or what we would now call physics.

But it must have very soon become apparent that, compared with the sun, the moon and the solar system, there were many things in the world—and perhaps, above all, people!—which were much more difficult to understand and much less predictable. Human behaviour was apparently relatively haphazard and arbitrary, dependent on the whims of the will. Human actions often seemed to proceed from sudden impulse or hidden motives, and you never knew what people were going to do next. Moreover, with regard to scientific enquiry, individuals had all sorts of strange ideas about things—including many strongly-held views and prejudices, impervious to reason—and these got in the way of finding the facts and distorted the truth, even about the world of nature. So, as well as the principle that the world was understandable when the right methods were used, science developed a strong bias in favour of objectivity, and a conviction that in investigating the world one must reject all personal preferences and put oneself in the position of an impartial observer, simply looking to see what the facts were. As far as possible, the subjective element was to be eliminated, and the scientist was to be an objective spectator in studying nature.

Schrodinger makes the point that this emphasis on objectivity came to be adopted almost unconsciously, or at least without its always being recognized and remembered. He writes of it:

There is, however, so I believe, a second feature [of Greek science], much less clearly and openly displayed, but of equally fundamental importance. It is this, that science in its attempt to describe and understand Nature simplifies this very difficult problem. The scientist subconsciously, almost inadvertently, simplifies his problem of under-standing Nature by disregarding or cutting out of the picture to be constructed, himself, his own personality, the subject of cognizance. Inadvertently the thinker steps back into the role of external observer. This facilitates the task very much. But it leaves gaps, enormous lacunae, leads to paradoxes and antinomies whenever, unaware of this initial renunciation, one tries to find oneself in the picture or to put oneself, one’s own thinking and sensing mind, back into the picture.

He goes on to point out that because we are unaware— or at least not fully aware—of what we are doing in adopting this scientific assumption that reality is purely objective and consists solely of the external world which exists independently of us, ‘…everyone willy-nilly takes himself—the subject of knowing—out of the world, and the [undoubted experience] ‘I am’ of [Descartes’] ‘I think therefore I am’ becomes ‘It is’ [i.e., the shared world of Nature is the only reality]’…

What makes these comments especially interesting is that they are the considered view of someone who is universally recognized as one of the outstanding figures in modern science, himself personally responsible for the development of Quantum Wave Mechanics. It is clear that they are particularly germane to the answer he gives else-where to the question: ‘What, then, is in your opinion the value of natural science?’, which is:

Its scope, aim and value is the same as that of any other branch of human knowledge. Nay, none of them alone, only the union of all of them, has any scope or value at all, and that is simply enough described: it is to obey the command of the Delphic oracle, get to know yourself. Or, to put it in the brief, impressive rhetoric of Plotinus (Enneads.VI.4.14) ‘And we, who are we anyhow?’

It is also the aim of the Yoga of Self-knowledge, which maintains that it can only be done when we adopt the experimental method and turn it to the inner investigation within our own personality, abandoning pure objectivity to investigate the subject. As the Brihadaranyaka Upanishad puts it:

The Spiritual Awakening of Science will be of interest to students of history and the history of thought. Some seekers with a knowledge of scientific ideas and commitment to scientific method may find it helpful to find the connections between scientific progress and the search for direct experience of reality through meditation and related practices. 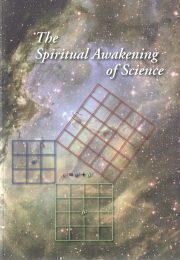 By A M Halliday