Realization of the Absolute: Naishkarmya Siddhi

Realization of the Absolute (Naishkarmya Siddhi) is a presentation of the pure non-dual teachings, with reasoned-out explanations to help us understand them.

It was written by Suresvara (or Sureśvara, also known as Sureśvarācārya) who was, according to tradition, a close disciple of Shri Shankara, and entrusted as head of the first of the four great monasteries established by Shankara.

There is agreement among scholars and devotees that Suresvara’s teachings remain entirely consistent with those of Shankara, and in some places express them in a way that is more readily understood. In Suresvara’s writings there are no departures from Shri Shankara’s principles, in contrast to views of some later Advaitins, among whom points of difference and potential confusion arose. Shanakara and Suresvara account for all of experience without in anyway compromising the non-duality of the supreme Reality.

According to this view, all our difficulties arise from lack of knowledge of our true nature, and all limitations are resolved completely and forever by Self-knowledge, which is Realization of the Absolute (Naishkarmya Siddhi). The source of this knowledge is the revealed writings that arise from the origin of all the world’s wisdom traditions, passed on by a traditional teacher who discloses the true meaning to a suitably prepared student. Actions dedicated to God purify the mind and prepare it for the rise of knowledge, and it is only in this sense that ritualistic acts of devotion lead to liberation.

The text shows why methods that do not give rise to knowledge cannot overcome the illusion that causes limitations and suffering. Then it goes on the present the right way of reasoning and reflection that leads to discovery of the real principle within.

The text consists of 422 verses in four books, with a commentary by the author, that looks ahead to the coming verse. Suresvara has a lively and approachable style. Here is a short selection:

[18] How can a person of discrimination, who sees the same one Self in the friend, in the enemy and in his own body, feel anger, any more than he could do so against the limbs of his own body ?

Author’s note: And for the following reason also the body, etc., is not-self.

[19] Further, the wise know that the body is not the Self for, like a pot, it is an object to those very senses which perceive external objects, while in dream the continuity (of the body-consciousness) is broken.

Whoso notes that the Self is sometimes identified with and sometimes distinguished from the individual personality, with all its effects and instruments from the body up, perceives directly that the latter is an effect credited with contradictory properties (i.e. consciousness and inertness) in the two cases.

[20] That same body, which is only just lifted by four pall-bearers with all their efforts, becomes light as a flock of cotton when adopted by the ego of a fool.

Because the truth of this matter is widely recognized, we proceed at once and without further argument to summarize the topic under discussion:

[21] Having discovered through reasoning that the physical body no more belongs to the Self than blueness to the sky, one should proceed to realize that the Self has no connection with the subtle body either, and this also through reasoning.

How should one refute (the sense of identity with) the subtle body? We reply:

[22] The notions of “I” and “mine”, effort and desire, etc., (which are factors making up the subtle body) are no more properties of the Self than leanness is, for they are perceived as objects and are as transitory as a garment.

About the original title: naishkarmya literally means without action or effect. Here it refers to that which is entirely beyond the whole process of action and reaction, cause and effect, which has been referred to by philosophers as the Absolute. Siddhi means a mastery or quality that one has attained through dedicated effort. So the overall sense of Naishkarmya Siddhi is Realization of the Absolute.

The text has been translated here from the original Sanskrit into English by A J Alston.

Realization of the Absolute Naishkarmya Siddhi will be of interest to students of Advaita philosophy. For dedicated enquirers it is one that could be studied carefully to help us gain the depth of understanding that constantly sees through the transient differences in appearances and perceives the enduring unity underlying them. 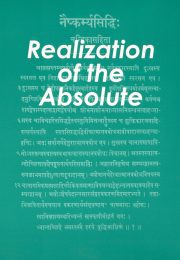