The Identity of Self and the Supreme

Let us consider the question: ‘What am I?’ In the collection of Shankara’s writings called The Thousand Teachings, we find the answer to this question presented in direct and uncompromising terms. For example:

I am the Lord, ever one and the same in all beings, beyond the destructible and indestructible principles, hence the supreme Spirit. Although I am the supreme Self and one without a second, I am mistakenly supposed to be other than this on account of nescience.*

I am the Self, entirely pure, without a veil, unaffected by nescience or its false suggestions or by actions and their results. Though (apparently) clothed in the powers of sight, hearing, etc., I am one without a second, eternally fixed in my own true nature, motionless like the ether of the sky.

I am the Self, the supreme Absolute, pure consciousness am I, ever without a second, other than name, form and action, ever liberated by nature. (10:8-9 and 11:7)

Our progress in wisdom is reflected in our evolving conception of the supreme being and our relationship with it. At first this supreme principle is thought of as the great power that rules the universe, separate from our own being, and worshipped as He or That. On deepening acquaintance, so to say, the pronoun changes, and this power is addressed as You, or Thou, as found in the religious literature of all traditions. But the final stage is to recognise that point of light and consciousness in our own being, in other words, our I, when distinguished from all that is changeable in us, as the same divine principle that we formerly worshipped as other.

This doctrine, which is a veiled secret in some traditions, which is generally spoken of in guarded terms by the mystics of Christianity and Islam, is the starting point of Shri Shankara’s philosophy. It is not only presented openly, but shown to be reasonable and an elucidation of our own experience. Through reasoning, Shri Shankara shows how any other view of human nature is invalid because of the contradictions implicit in that view, or because it does not account for the whole of human experience.

At first sight, nothing could sound more unreasonable than to affirm that the true Self of a mere human is identical with the supreme reality. It should be noted that this is not speaking of a special type of person, but of our nature in general. This truth is, so to say, the pearl that is hidden in the oyster shell of our personality. What is the source of our knowledge of this truth? For this we have to go back to the Upanishads. Here we find there are certain short statements, which proclaim this identity, and then we find many other verses in which this identity is stated or implied in more expanded terms.

One of these key utterances is found in the Brihadaranyaka Upanishad: ‘I am Brahman’, Aham Brahmasmi in Sanskrit. Brahman here means the Absolute, the ultimate Spirit, the All, God in the highest sense. We are considering a text which goes back centuries before Christ, and almost certainly pre-dates the Buddha and the philosophical flowering in ancient Greece. The passage that contains this utterance is too profound to be readily understood and still retains its aura of sublimity; few statements can be so direct in their utterance of the highest truth.

This (Self) was indeed Brahman in the beginning. It knew only itself as ‘I am Brahman’. Therefore It became all. And whoever among the gods knew It, also became That. And the same with sages and men…To this day, whoever in like manner knows It as ‘I am Brahman’ becomes all this (universe). Even the gods cannot prevail against him, for he becomes their Self. While he who worships another god, thinking ‘He is one, I am another’, does not know.
(Brihadaranyaka Upanishad 1:4:10)

Brahman itself, being the Absolute, is beyond the range of human thought, and can only be apprehended through the awakening of a higher faculty of Self-knowledge which comes to light in a condition of inner stillness, brought about through the dedicated pursuit and practice of the spiritual life. It is That ‘from which the universe came forth, in which it abides, and into which it is finally dissolved’. The universe is held to be an appearance of Brahman, not ultimately real in itself. Though Brahman is undetected by the human senses, if it were not present as the underlying reality, nothing would exist. There is nothing outside Brahman, the Infinite, and it has no internal divisions or parts. The Upanishads speak of it as ‘That’, and all conceptions of God are tentative means to approach the reality of Brahman, yet while these remain conceptions, however sublime or subtle, they can never embrace the ultimate source of being, Brahman. Hence the Upanishads warn the enquirer that Brahman is ‘not this, not this’—neti, neti. Yet, far from being an emptiness or a negation, Brahman is the source of all our experience, empirical and spiritual, and is ‘greater than the great’.

Then we return to the question, ‘What is this ‘I’ in us, this apparent centre of identity which provides our individual selfhood?’ What right have we to equate it with the infinite, nameless, sublime principle indicated, not defined, through the language of the Upanishads? First, we ourselves are encouraged to investigate the nature of the ‘I’, through learning to expand our powers of reflection and introvertive penetration. This we can only do through a training in tranquillity and inward alertness. When we make this investigation, we encounter what might be called the mystery of consciousness.

Even as we go deeper within ourselves, away from the sense life, into our inner world of thoughts and feelings, consciousness seems to play an essential part in the experience. It is always there, but somehow not noteworthy in itself. It only seems meaningful when manifest through certain recognisable functions.

But there is deeper light to be shed on this aspect of our experience. Another of the great upanishadic utterances is: ‘Consciousness is Brahman’—Prajnanam Brahman. This in turn gives us an insight into the meaning of the statement: ‘I am Brahman’. Because, if we ask, where God is in human nature, the answer is: God is the very consciousness in us. In other words, it is consciousness which in the end will show us that we are not ‘only human’, for our true nature is consciousness absolute, and there is no ‘self’ apart from That.

For one who has this realization, this infinite and non-dual nature of the true Self is the only valid experience. It is beyond the range of the mind. However, through enquiry, through carefully examining our own internal experience we can, up to a certain point, determine what the Self is not.

* Nescience, or metaphysical ignorance, signifies our unawareness of the ultimate truth of the non-dual, absolute nature of the Self, accompanied by our conviction of the reality of the world of multiplicity.

Extract from Chapter:
The Open Secret of the Upanishads 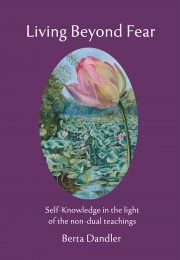