What is the conception of consciousness in the West? Awareness—awareness of something, awareness which lies inherent in the mind but which needs the co-operation of the mind and the sense-organs before it can function. Consciousness is thus perception, either mental or sensory, and is a distinctive characteristic of the mind. The idea that Consciousness could exist independently of a ground for its manifestation, is neither acceptable nor even seriously considered here as yet.

According to the non-dual teaching, Consciousness is not the property of anything nor does it completely reside in any object. All objects reside in it, like islands in a sea. Matter, force and mind are its evolutes and its dependants. It is the great independent root, the motionless medium for all activity. Empirical consciousness is but a partial manifestation of that greater Consciousness. There is nothing outside or independent of it; nothing exists but by its permission. Everything is Consciousness in varying degrees of opaqueness or illumination. It is called chit in Sanskrit and it is one of the triple designations of God: sat chit ananda—meaning existence absolute, consciousness absolute and bliss absolute. These three aspects are only partially known to man while he works empirically, but they are present every-where and all the time, to be experienced in their fullness by whoever is willing to pay the price for so doing.

It will be seen that these two definitions of Consciousness—the one ‘awareness’ and the other ‘spirit’—differ widely and essentially from one another. Although Western thought today is reducing all matter and energy to one category, and is giving both energy and matter a common root, it is not envisaged that that root is Consciousness. The implications of these two attitudes are most important and need to be appreciated if an understanding of the significance of the Advaita philosophy—the philosophy of non-duality, upon which this Yoga is based—is to be attempted.

Extract from Chapter:
The Power Behind the Mind 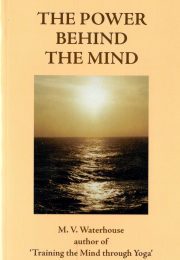